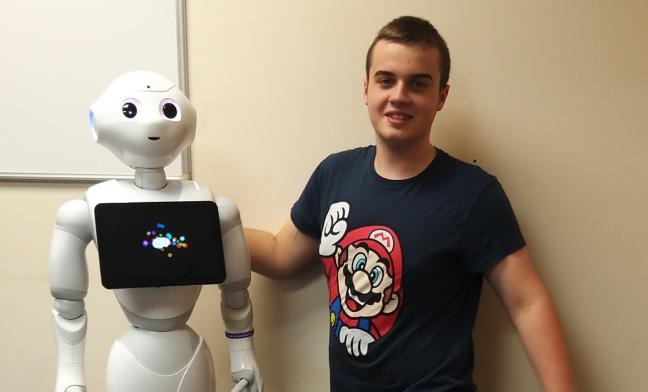 A teenager has been drafted in to programme Southend Council’s AI robot, Pepper.

While much of Pepper’s coding has been done by council officers, Kurtley Dorn is providing some fun new programmes for the £17,000 robot, bought by the council in 2017 for social care tasks.

Kurtley, 17, from Eastwood, while volunteering for the special task, is also proving that having autism doesn’t hold him back.

His father, Karl, 52, said: “Kurtley was a pupil at Cedar Hall, and since the age of 12 I have been getting him to learn computer coding at home. I did this because I knew that autistic children struggle to get work when they leave education so I wanted to give him a better chance to buck the trend.

“I knew his world revolved around computer games so getting him to learn more about how they worked and the need for many computer based workers in the future was a path we made him follow.

“Kurtley was very good at maths, and computer based studies while at Cedar Hall, unfortunately his English let him down a bit so when we applied for him to take a computer design course, they looked at his English and suggested he tried the lowest set first.

“But when I showed them his computer work they quickly put him in the highest set. He has thrived within the top set of coding and his work is regarded outstanding, he has been recommended to miss the next year at level 3 and go straight to a level 4/5 university course which we intend to do. Everhone at the Hub has been great ”

Kurtley, who also volunteers at the Belfairs Woodland Centre, has programmed Pepper with new games and puzzles at the South Essex Community Hub in Southend and is working on a programme to do with Southend Pier.

When lockdown is lifted it’s hoped he will be able to travel around Southend schools with Pepper and to help other autistic children.

Mr Dorn added: “Lockdown has been hard on Kurtley so having Pepper has been phenomenal. He’s taken it upon himself to do this as his duty. I want to tell people that autistic people can do stuff if given the chance and they are loyal and hard-working.”

Kurtley added: “I’m really loving it. It’s been really good having pepper during this difficult time. I’m learning loads and it’s so fun.”